Bali is mostly known for its amazing natural attractions; however, don’t you also know that Bali becomes even more famous recently due to its majestic manmade structure? The newly erected statue of Garuda Wisnu Kencana gives Bali a new epithet as the site of one of the biggest statues on earth. If you are curious about this statue and have a plan to catch a sight of it during your next visit to Bali, Sandholiday can escort you to the cultural park where this grand statue is located, but before you visit this statue, you may want to know about some interesting facts about it.

It can be potentially the largest statue in the world.

The 121-meter tall statue is about 30 meters higher than the Statue of Liberty, making it one of the tallest statues on earth. In terms of height, the Garuda Wisnu Kencana statue is the fourth tallest on earth after the Spring Temple Buddha statue in Henan, China; the Laykyun Sekkya Buddha statue in Myanmar; and Sardar Patel in India. However, because it is as tall as it is wide, in terms of volume, Garuda Wisnu Kencana can be regarded as the largest statue in the world. In fact, the statue’s wingspan alone, which is measured at 64 meters, makes it the widest statue on earth. It is also considered one of the heaviest statues on earth, with weight measured at 4000 metric tons. Visiting this majestic statue can be a great trip plan to make if you want to observe the new wonder of the world taking shape in Bali. Consult Sandholiday to get more information about the best way to reach the site of this statue depending on the size of your trip.

Understand the meaning of the name. 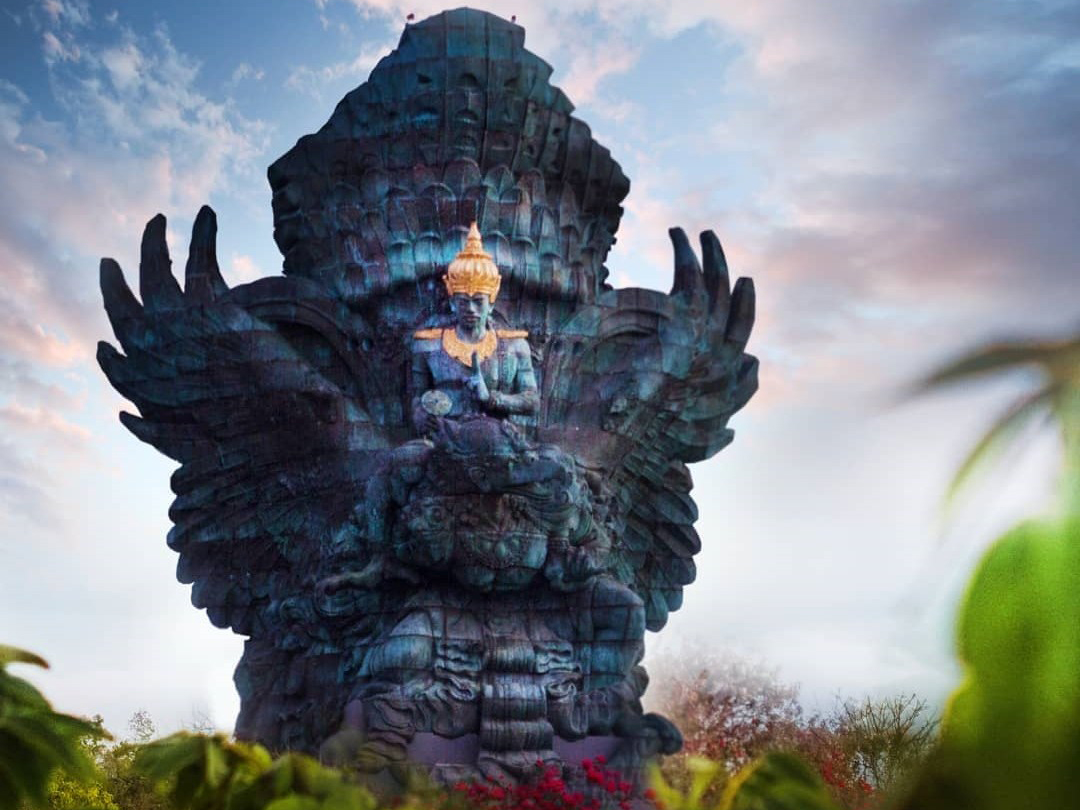 The name of the statue is Garuda Wisnu Kencana, which identifies the core elements of the statue, which consist of the statue of the mythical bird Garuda and the statue of God Wisnu (Vishnu) who rides it. The word Kencana means gold. Although no part of this statue is made from gold, the word may refer to the gold-colored crown that is worn by God Wisnu. It may also refer to the valuable message that the statue conveys. I Nyoman Nuarta, its designer, stated that the statue symbolized a spiritual inspiration for the human to nurture the earth and the environment, and to make the right decision when they have the ability to care for and to destroy the earth. To see how such a message manifests in the form of a majestic statue, you may want to plan a Sandholiday tour to the cultural park where it is located.

The designer is known as Indonesia’s renowned monument maker. Other notable monuments that are attributed to him include the Arjuna Wijaya Statue that is located in a large intersection at Jalan MH Thamrin in Jakarta, the Proclamation Monument in Jakarta, Karapan Sapi Statue in Surabaya, Putri Melenu Statue and Lembuswana Statue in East Kalimantan, Timika Statue in Papua, and Wayang Statue in Solo.

His tenure as a maestro is not without controversy, though. One of his statues, the Tiga Mojang Statue, a 19-meter tall statue that depicts the image of three ladies, was torn down by the authorities following a protest expressed by a local mass organization.

In fact, the building and placement of the Garuda Wisnu Kencana statue are not without controversy. Balinese people originally rejected the erection of the statue in the island because the statue’s unusually large size and heavy weight were believed to become a possible disruption for the island’s natural and spiritual harmony. They also lamented the commercialization of the statue, which was regarded as sacred. Despite the controversies, the statue finally found its place both at the namesake cultural park at one of the hottest tourism spots in Bali and in the heart of Balinese people because the statue gave their island a good name.

If you are an art lover who wishes to observe all of I Nyoman Nuarta’s masterpieces and to visit his studio in Bandung, West Java, you can plan a long trip with Sandholiday, starting from Jakarta where two of his famous statues are located and ending at the cultural park in Bali where you can observe his most monumental tour de force.

It took twenty-eight years and almost $100 million to build the statue.

The Garuda Wisnu Kencana statue takes twenty-eight years and six regimes to complete. Its building was initiated by Joop Ave, the Indonesian Minister of Tourism, Post and Telecommunications during the Soeharto era, and completed in 2018 in the era of Joko Widodo. The building of this statue took a total budget of about $98 million to complete. Its building process was temporarily brought to a halt near the beginning of the millennium due to the economic crisis that hits the country and resumed in 2013 when a new sponsor, PT Alam Sutera Realty Tbk, agreed to fund the project.

The budget is needed not only to construct the statue but also to transport it from the studio where it was designed in Bandung to Bali. Due to the gigantic size of the statue, it must be cut into hundreds of modules and then transported to Bali using at least 300 trucks.

Despite the enormous project, no one is injured during its construction. The Garuda Wisnu Kencana statue is perhaps one of the very few megastructures that are built with zero accident. 120 sculptors are involved in its making and more workers are hired to transport every single module of the statue and to assemble it on the construction site. Heavy pieces of machinery, including cranes, are also used to put each module at the right place. Despite the enormity of the project and the many people and pieces of machinery that are involved in its construction, no one is actually injured during the execution of the project.

The large statue is designed to withstand the destructive force of the elements. 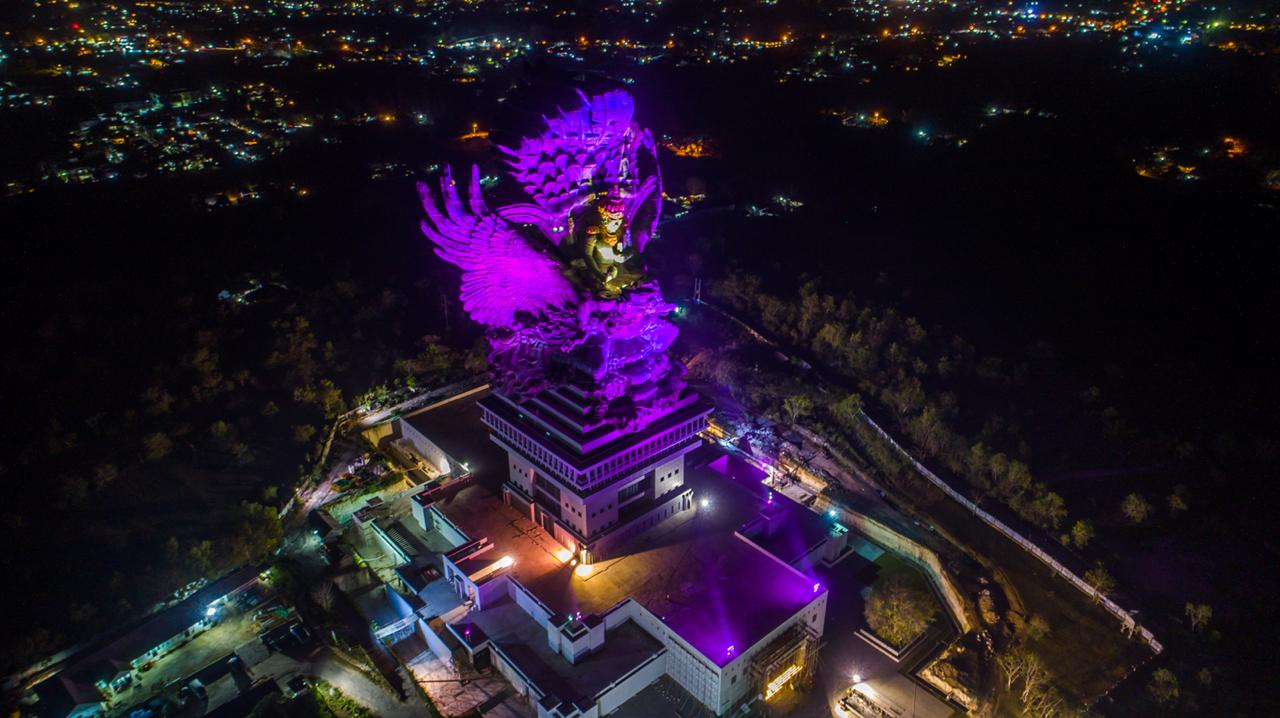 If a part of your Sandholiday tour is a visit to this statue, you may wonder whether the gigantic edifice is stable enough to withstand all destructive natural forces. According to I Nyoman Nuarta’s explanation, the statue is designed to be strong enough to withstand all destructive forces of elements, including earthquake and strong wind, which are often considered the biggest enemies for every large structure. The Garuda Wisnu Kencana statue will only be destroyed if it is hit by a strong wind with speed measured at least 250 knots, while the average wind speed in Bali is measured at only between 10 and 13 knots.

The material of the statue is also designed to be durable and to withstand rust and other damages caused by long exposure to elements. I Nyoman Nuarta stated that the statue will stand for at least 100 years before it shows a sign of damage. Proper maintenance of the statue, which will obviously be performed, will significantly extend its strength and durability.

It is not only a decorative statue. 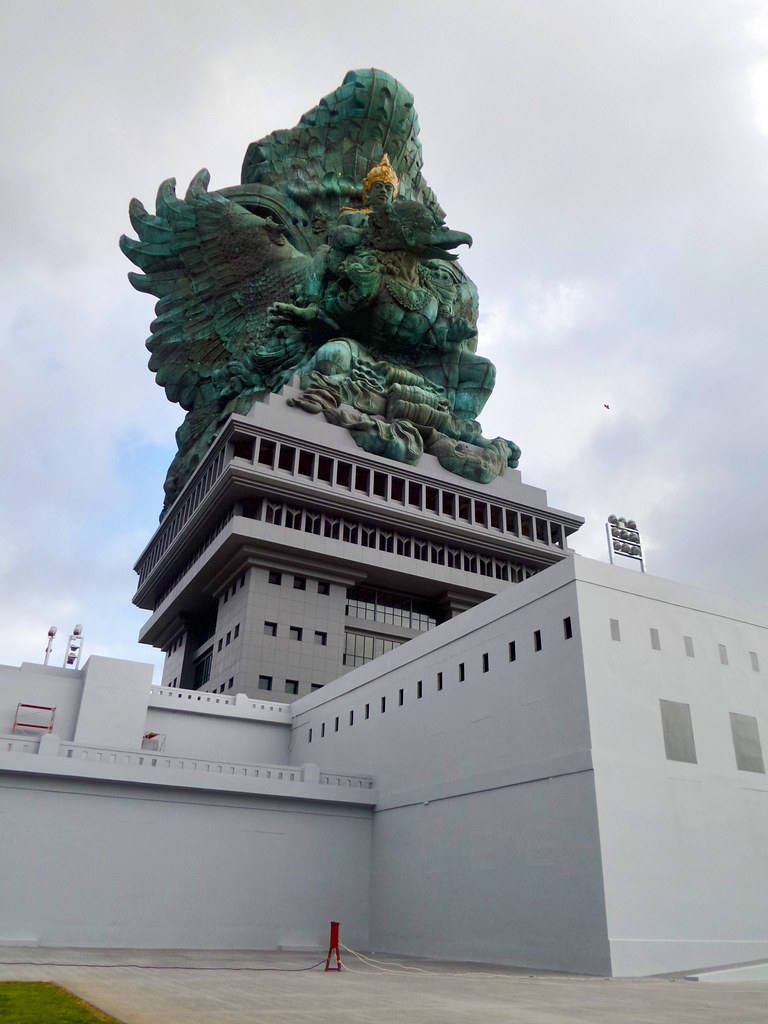 The best thing about Garuda Wisnu Kencana is that it is designed not only to be a decorative statue, but also a functional monument that can be entered and climbed. The 121-meter tall statue includes a 46-meter base that will function as a ballroom, a museum, and other entertainment and cultural venues. The entire structure consists of 30 floors that extend from the base of the pedestal to the upper part of the statue. Of all of those floors, only 23 floors will be accessible to visitors. The 23rd floor, the topmost floor accessible to the public, is located at the shoulder of the Wisnu (Vishnu) statue. The floors above this floor are closed to prevent visitors from stepping on the God Vishnu’s head—an act which is considered sacrilegious.

Since February 2019, only two floors, the eight and the 23rd floors, are accessible to visitors. Both floors include a viewing gallery where visitors can watch the scenic panorama around the statue. In the future, more floors will be accessible for them when new venues become available.

Planning a Sandholiday tour to the Garuda Wisnu Kencana Cultural Park is thus considered worthwhile. When you visit the park, you and all members of the trip will have a chance not only to observe the magnificent statue but also to enjoy all the cultural attractions that the functional statue offers.

The statue and the park are easy to reach.

If you want to visit the park where this gigantic statue is located, there are several ways to reach it. You can hire a taxi or an online transport service, you can use your own car or a hired car, or—if you are traveling with your family or friends—you can call Sandholiday. This bus charter company can provide you with a minibus or a larger bus depending on the size of your trip.

What are the Biggest Statues in the World Taking Shape in Bali?

1. It can be potentially the largest statue in the world
2. Understand the meaning of the name
3. The designer is known as Indonesia's renowned monument maker
4. It took twenty-eight years and almost $100 million to build the statue
5. Despite the enormous project, no one is injured during its construction
6. The large statue is designed to withstand the destructive force the elements
7. It is no only a decorative statue
8. The statue and the park are easy to reach

What is the statue of Garuda Wisnu Kencana?

The Garuda Wisnu Kencana statue is the fourth highest in the world after the Buddha Spring statue in Henan, China; Buddha Laykyun Sekkya statue in Myanmar; and Sardar Patel in India.

It was designed by I Nyoman Nuarta, a famous Balinese sculptor who is famous for having many monuments standing in various places in Indonesia.