Barong Dance Ubud Bali – The Barong dance is one of the most iconic dances on the island. It also includes drama in it and you will also see the appearance of dancers doing Kecak dance and Legong dance. If you have such an interest in culture and arts then these dances would be a favorable performance for you. The dances are basically held in various stages in several areas on the island. Most of them are scheduled on a daily basis and are located in the main tourist areas.

One of the most popular stages of Barong dance is located in Batubulan, Gianyar. It is part of the Denpasar suburbs for sure. The shows are locally managed and run by local villagers. Other than that, you will see the gamelan orchestra walks along the show from the start until its end. This is why if you are planning to visit Bali for your holiday then this show cannot be missed out.

The barong dance tells about the classical tale between good and evil from the 12th century called Calon Arang. This will be the backdrop of the show. The Barong is a benevolent spirit trapped inside a beast and he must protect his kingdom towards the meanest wrath inside the widow and witch queen named Rangda. There will be two dancers inside a heavy barong costume that will manage and work out the movements. It looks similar to the Chinese lion dance. There are also many supporting dancers around and they portray villagers, priests, and monkeys.

The Myth about Barong dance

So, the local Balinese believes that the spirits are the fellow conspirator of the Majesty of Gede Mecaling. The queen ruled the unseen nature and until now she stays in the Southern Ocean of Bali located in Pura Dalem of Nusa Penida. Back then, a powerful and respected priest advised the local people to create a statue for the resemblance of the Queen Gede Mecaling.

The figure is pretty tall, black, and has fangs. People later paraded it around the village and this trick works to stop the bad spirits. The spirits were frightened to see the form of their big boss. Until now, many villages would periodically parade Barong Landung in order to avoid any disaster.

Things to know about the Barong dance 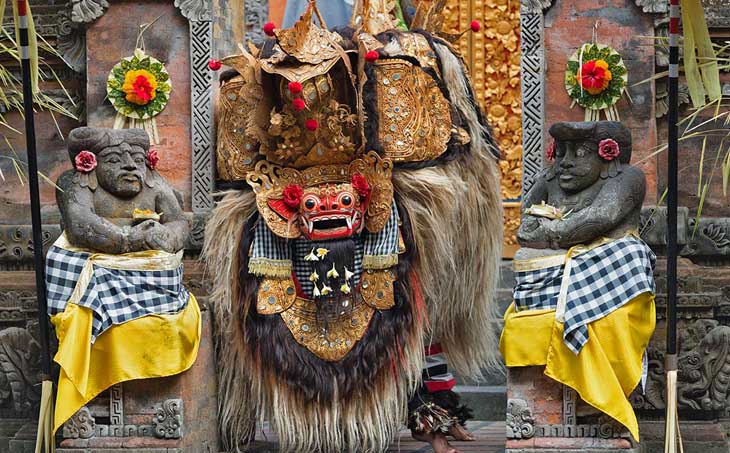 Before you watch the show, commonly pamphlets with synopses on it will be handed right at the ticket booth. This is why you can learn the brief story or the outline of this dance. If you do not read it then it might be very possible if you have no idea what you are watching. Other than that, the narration is so little since the performance is dominated by dances.

Other than that, you will hear the vibrant gamelan spreads across the theater after the audience got their seat. The first thing you will see is the dancing monkeys enter the stage as the drama unfolds. The monkey playfully teases around the peaceful and orderly forest. The Barong will come over later.

The peace showed since the first time the performance was started would be disturbed by some troublemakers. And it turns out that Rangda sent them all and a scuffle ensues. Rangda has also set out black magic across the forest and recruiting more followers at the same time. As a result, the followers turn into malevolent beings as well. The palace guards even sign himself up to the black magic of Rangda.

This is when you see the Bardon tries to protect and defend the kingdom and got into a one-on-one situation with Rangda. It seems unequal though, considering Rangda always bring her black magic everywhere. Other than that, she always wears her signature white cloth that swings the malevolent spells on its every swoosh.

The climax scene shows the guards of the palace in trance. They scream very loudly and start fiercely stabbing their chests with their daggers named kris. However, there is no harm caused considering they are under the spell of black magic that will keep them endured in any case.

Later, the Barong will come to the rescue and try to lift the spell of those who got inflicted by it. Other than that, you will see that a priest also comes around the spot and sprinkles holy water so the kingdom can be fully revived. It also means that Rangda is defeated. Basically, there are various versions of the story and each stage or location where the show took place has its own story. 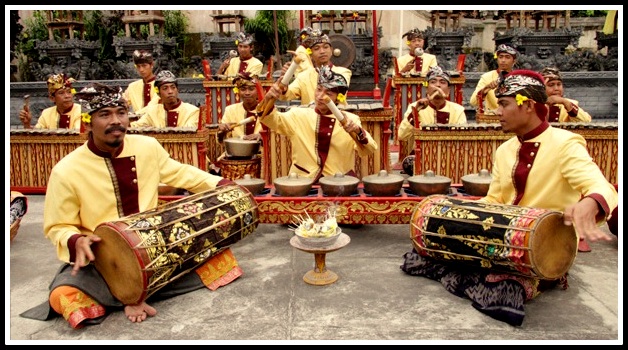 As we have mentioned earlier, there would be music accompanied the dance right from the start. Balinese traditional music from gamelan orchestra would be something you will hear, sending such a mystical sense to the whole room. You might feel that the sound is strange and weird but after a few minutes, you will definitely be enjoying the whole show as well as the music.

Other than that, gamelan has been part of the traditional music of Indonesia. Many studies have been subjecting gamelan. Also, do not forget to read the pamphlet handed to you from the ticket booth before you start watching the show. There will be very little narration during the dance for sure.

Can I bring my kids watching Barong Dance Ubud Bali?

Actually, the Barong dance is one of the most intriguing dances and performances on the island. Other than that, the dancers are very talented which could be courage for your kids to be whatever they want to be when they grow up.

However, as we have mentioned earlier, there would be a scene where people stabbing their chests fiercely by using their kris and it could be a violence scene to be watched by kids. Sometimes, you may also hear some naughty “Balinese humor” screamed by the monkeys. So, the choice is yours.

As one of the traditional dances in Bali, Barong dance has brought interests from many visitors. During its development, the dance is not only performed for a certain event like what happened decades ago but also became a feature of the tourist attractions on the island.

In spite of being the tourist attraction, the dance that now becomes a business in Bali is also proof of the nowadays’ generation on preserving their culture and tradition. This dance is basically helping the communities to be aware more than before. There is also a group or community that always performs this dance to the tourists, both domestic and foreign. Sahadewa Group can be touted as the first yet the biggest community that develops this traditional dance of Bali and not several places in Bali also try to be part of preserving this tradition.

There are several places that show the performance of Barong Dance Ubud Bali. And generally, one ticket costs around IDR 80,000 and USD 100,000, depending on the location you choose to watch the performance. It will be around USD 7.

And Ptgl Kelod Ubud also opens for the show on Monday at 6.30 pm. The ticket also costs IDR 80,000. The prices may change anytime without prior notice so you better be prepared. Still, the show is worth your dollar and time for sure.

Are you interested to watch the dance and performance? Sandholiday is not only taking you to places like this but also will arrange your itinerary. You do not need to worry about transportation or lost in some strange spots in Bali. Other than that, you can get into places you want to visit during your holiday in Bali. Long story short, Sandholiday is a tour and travel company that would be the perfect vacation buddy.

Considering Sandholiday is around since 2017, the vehicles are still relatively new. You can even choose which vehicle you want to take. No matter you are planning on your own, with your partner, with your big family, or with your business colleagues, Sandholiday will provide anything you need. They put customer satisfaction on top of the priority list. So, you really have no reason to not choosing Sandholiday for your vacation buddy in Bali.